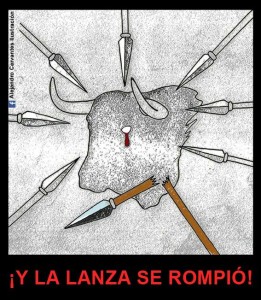 the entry of the light now dawns.

of the animals; are by kind permission reproduced here on the pegasus animal healing Blog.

and violence against Gaia’s children.

“festival” in the town of Tordesillas Spain and other similar events,

PACMA,Spain’s animal  rights political party and many Spaniards it seems are now

of bulls after years of peaceful protest .

resulting in its death by using spears, lances etc by human., “contestants”

mounted on horseback and also on foot.

We have had visions some years ago of broken lances, swords and spears,

its been foretold. Its what Stuart Wilde

and Khris Krepcik have referred to as”The Renewal” .

We each have the opportunity whilst here on Earth to work on ourselves to clear our own dark.

Those who engage in torture an violence ,affronts to Gaia ultimately harm and trap

themselves, its a karmic thing.Gaia the spirit of the Earth is way more powerful than humans

“All equations must be balanced, we can only become observers of the process

and be humble and learn from it.

The”domino effect of the Tordesillas prohibition

today then other dark anomalies lined up behind is shown in Alejandro’s drawing below. 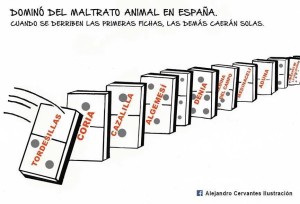 the ban was “a historic step toward eliminating

all celebrations involving violence toward animals”.

must still be approved by the regional Parliament.

The Spanish regional Decree is a response to the rising number

of protesting against animal maltreatment and violence.

The Decree notes that the”festivals”

are part of the country’s “cultural heritage”

but accepts that modern legislators must recognize that times,

the sensitivities and ethics of Spaniards have changed.”

There is now it seems growing and relentless opposition

in Spain to ” festivities “where bulls are tortured and killed.

Increasingly numbers of Spaniards reject that torture of any kind

could ever be “culture”.

They are determined to press on for

change now in this 21st Century by peaceful democratic means.

The changes brought and which will be brought for

the protection of inherently beautiful and celestial creatures,

are important for all humanity as well as.

for the animals themselves; so that we may truly understand

With much gratitude to Alejandro Cervantes

All drawings are the copyright of

View all posts by Wendy Datta »